Nurses and Midwifery Council UK has released NMC OSCE new pass percentage for the month of January, February and March 2019 for three different universities conducting the exam. More details are given below.


Three univeristies ie Oxfords Brookes University, University of Northampton and Ulster university are conducting the OSCE exam for nurses trying for nmc registration in UK. Among these three, Ulster University situated in Northern Ireland has the highest pass percentage of the all three universities.

But you have to note that pass percent of OSCE was 91% in January but 82% in February 2019 in Ulster University.

Overall, if you take exam in Oxford Brookes University, an average of six people out of ten taking the exam will pass OSCE where as those who are taking in University of Northampton and Ulster university out of ten, an average of 8 – 9 candidate are getting a definite pass.

You can see the latest pass percentage of NMC OSCE by viewing the image below, 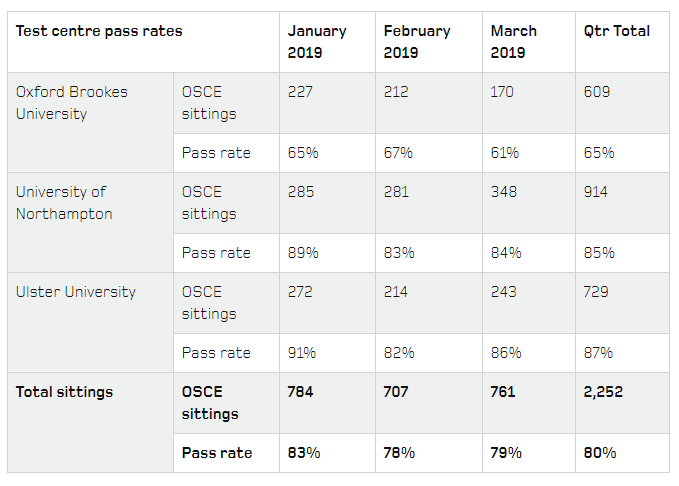 Since NMC has decreased the third attempt OSCE wait period from three months to 10 days, its very rare to see the candidates are returning home because they are unsuccessful in OSCE.

NMC has also decreased resitting fees ie both partial resit and full resit fees from 494 to 394 pounds, 994 to to 794 pounds respectively.

Candidates who are failing in their third attempt (eventhough very rare) soughts help of solicitors to pass the OSCE if they are failed because of minor mistakes.

We have filled this website with handfull of articles useful for passing NMC OSCE in your first attempt. Hopes all of you will find your way out. Thanks for reading.

This website uses cookies to improve your experience while you navigate through the website. Out of these, the cookies that are categorized as necessary are stored on your browser as they are essential for the working of basic functionalities of the website. We also use third-party cookies that help us analyze and understand how you use this website. These cookies will be stored in your browser only with your consent. You also have the option to opt-out of these cookies. But opting out of some of these cookies may affect your browsing experience.
Necessary Always Enabled

Any cookies that may not be particularly necessary for the website to function and is used specifically to collect user personal data via analytics, ads, other embedded contents are termed as non-necessary cookies. It is mandatory to procure user consent prior to running these cookies on your website.